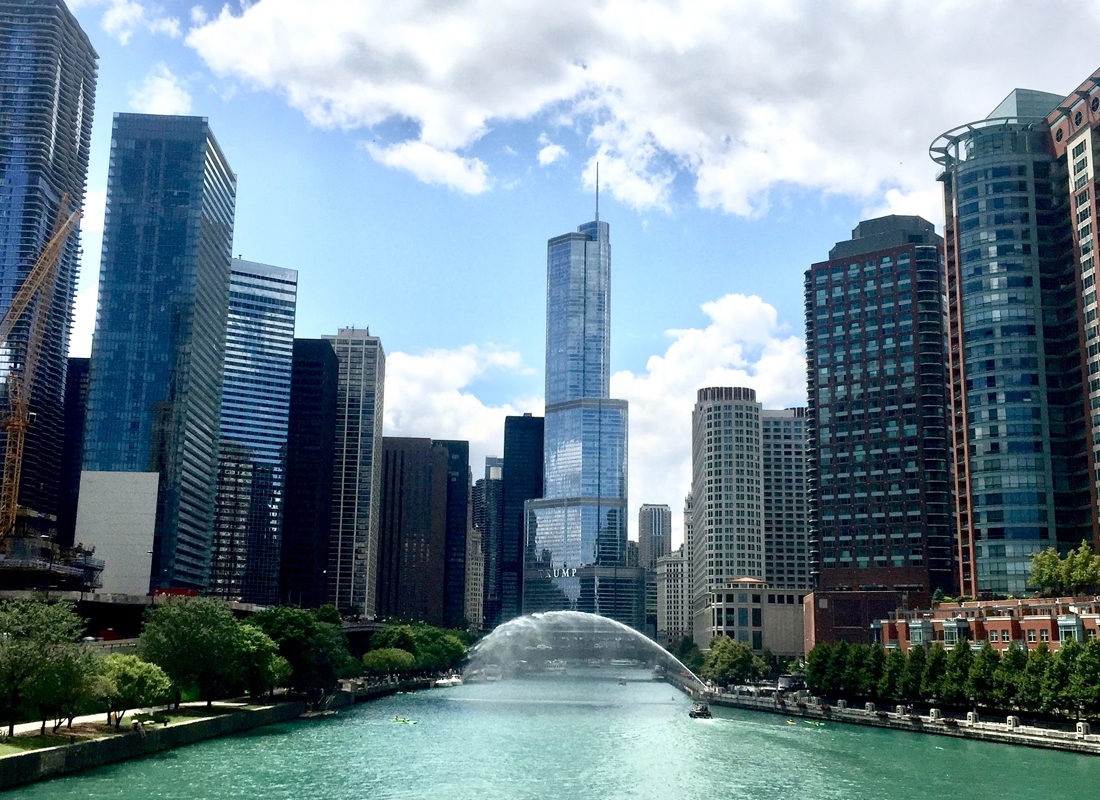 I’m on a flight returning from Chicago and reflecting on something that I’ve frequently recommended, heard great feedback about but never experienced in person;  The architectural river cruise.  It is all that.  After a look on line for the best reviews of the various operators and times available we chose the Wendella cruise on the river.  First out in the morning was our preference as it would be a great way to start the day, early summer Chicago sun glistening  off the glass of high-rise buildings, lower humidity preventing the sticky muggy thick air feeling, and the energy of the city streets above us as the hubbub of the kaleidoscopic morning commute to offices shapes up.  Then, enjoy a cup of coffee and a tasty muffin while we take in the sights.  It was so much more!  The architecture is one thing (and it is incredible, as are the stories of the buildings’ origins) but understanding the strength and resolve of a community to not only completely rebuild after the fire in 1871 devastated the city leaving nothing but smoldering ash and smoke, but to take it to such a level as to become the world class city it is, was nothing short of remarkable.  The architectural accomplishments to support the rebirth, both historically and current, were only the exclamation point to the human interface.  Did you know the tallest building designed by a female architect is in Chicago?  Or that the largest building conversion from warehouse to office in the country is currently underway on the riverfront to name just a few of the on-going projects.  But what struck me was the courage and resolve of the people that built the city back up, and up, and up.  Literally and figuratively! As we slowly motored on the light greenish/blue water in a river that flows away from the mass body of water known as the Great Lake Michigan (another story unto itself as a feat of engineering and legal maneuvering) on a slightly overcast morning with sprinkles from a soft gray sky, the pervasive thoughts that kept creeping into my head were of the people making things happen.  All of them, any of them.  Mies van der Rohe, Montgomery Ward,  the Mayors Daley and on and on and on.  Do I, do you, have that same vision and tenacity to succeed?  The drive, passion and belief in what it is we’re doing to pursue it to the same level as these incredible pioneers in their fields?

I left Chicago inspired and motivated and will always hold that vision of lore, when Mrs. O’Leary’s cow knocked over the lantern that started the great Chicago Fire.  Without it, Chicago, or Chicagoua as the Indians named it, might just still be a sleepy river city built along the banks and banks of stinky garlic plants.  And, by the way, it really wasn’t the O’Leary cow that started the fire.  Take the cruise to hear what really happened!

Now be bold and build your own architecturally fabulous Chicago!

This website uses cookies to improve your experience while you navigate through the website. Out of these cookies, the cookies that are categorized as necessary are stored on your browser as they are essential for the working of basic functionalities of the website. We also use third-party cookies that help us analyze and understand how you use this website. These cookies will be stored in your browser only with your consent. You also have the option to opt-out of these cookies. But opting out of some of these cookies may have an effect on your browsing experience.
Necessary Always Enabled
Necessary cookies are absolutely essential for the website to function properly. This category only includes cookies that ensures basic functionalities and security features of the website. These cookies do not store any personal information.
Non-necessary
Any cookies that may not be particularly necessary for the website to function and is used specifically to collect user personal data via analytics, ads, other embedded contents are termed as non-necessary cookies. It is mandatory to procure user consent prior to running these cookies on your website.
SAVE & ACCEPT